A Bike to Work Backpack–That’s a Thing? 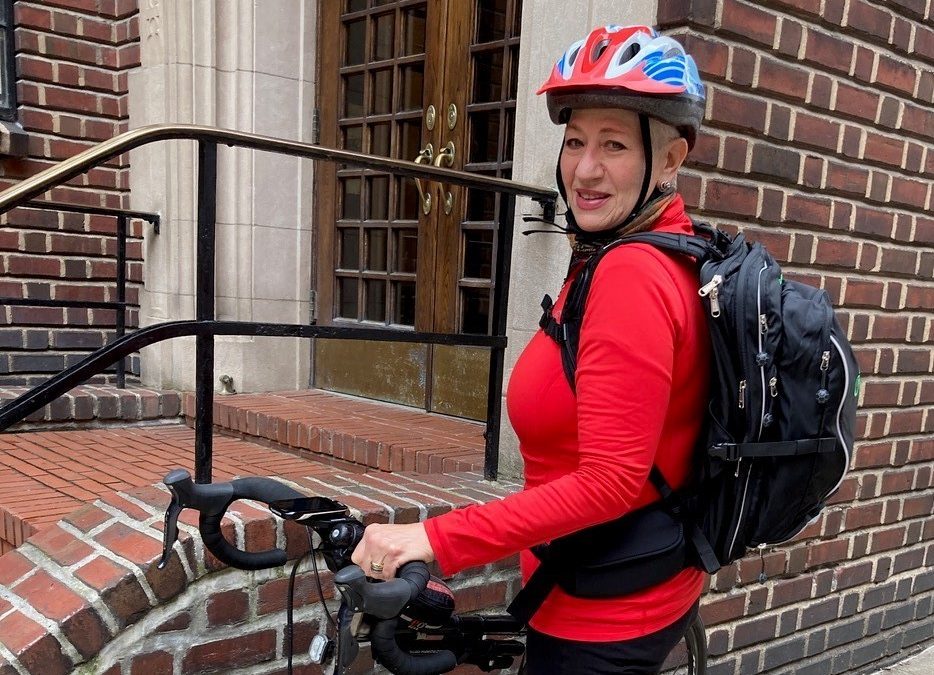 Have you ever thought about Biking to Work only to get frustrated that there is no way to transport your work clothes crease-free, not to mention all the other workday items?  GrüneStrasse founder Aaron Weiss was in the same predicament nearly 20 years ago, leading him to search far and wide for the backpack solution tailored to this exact need.  Finding no “suitable” 😊 backpack that allowed him to carry his suit or uniform crease-free, Aaron decided to design and manufacture his ideal Bike to Work backpack. Continue reading and learn how his idea became the Shellback backpack—The World’s Most Comfortable Bike to Work backpack. 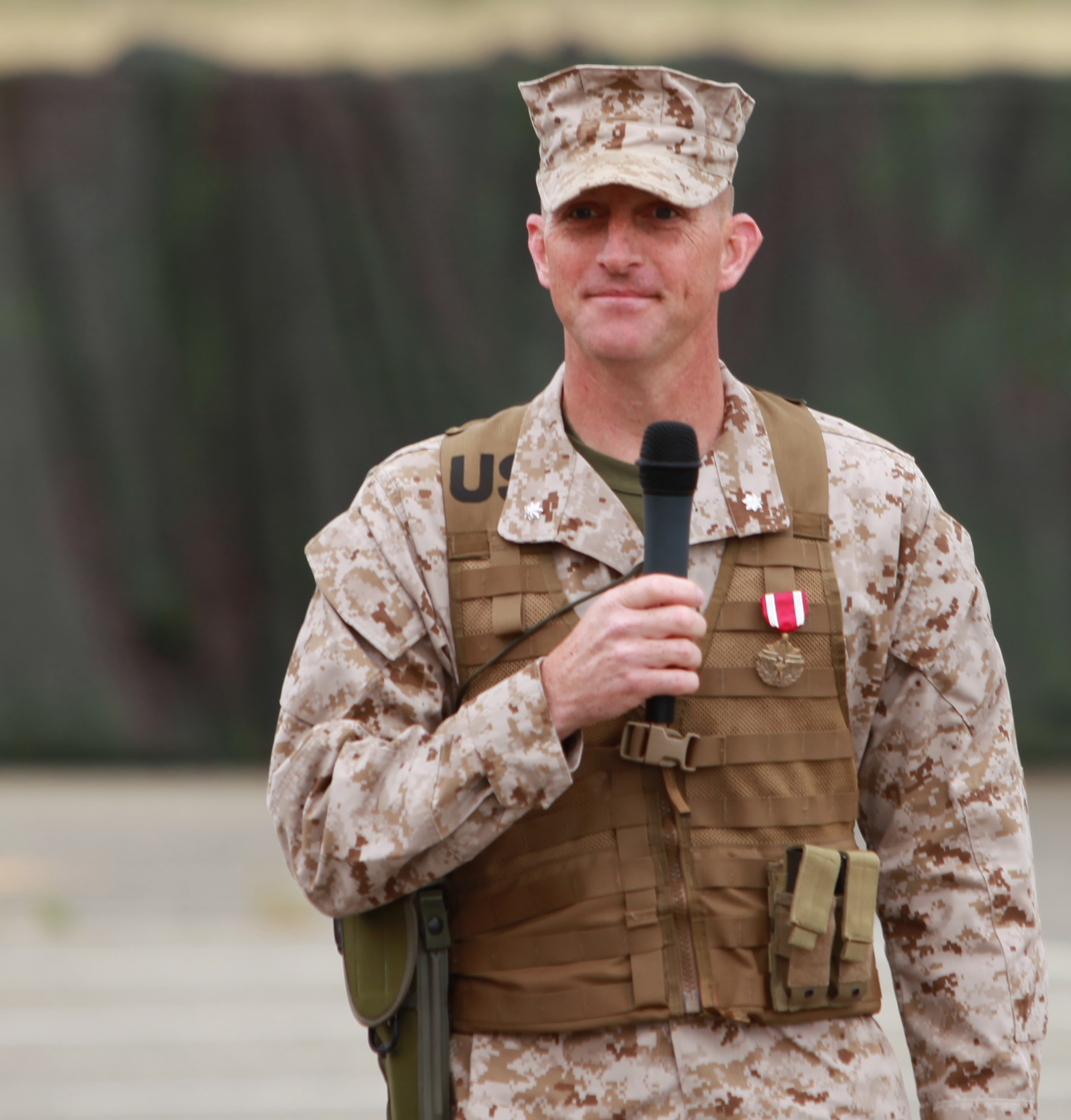 As a lifelong bike to work commuter, riding to work in Washington, DC, Camp Pendleton, CA, Okinawa, Japan, and even at Al Asad Air base in Iraq, Aaron knew the optimum Bike to Work backpack needed three things:  to simplify packing and unpacking; to help organize all the things you need during the work day; and to protect the rider and the contents inside.  Those three components:  Simplicity, Organization, and Protection became the Shellback SOP for biking to work. 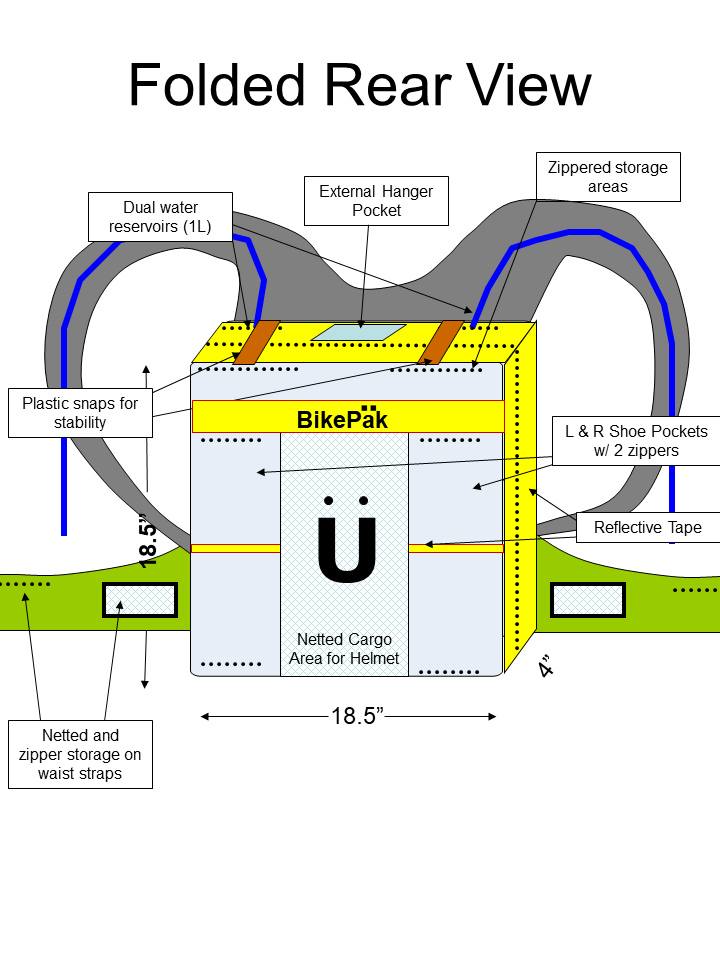 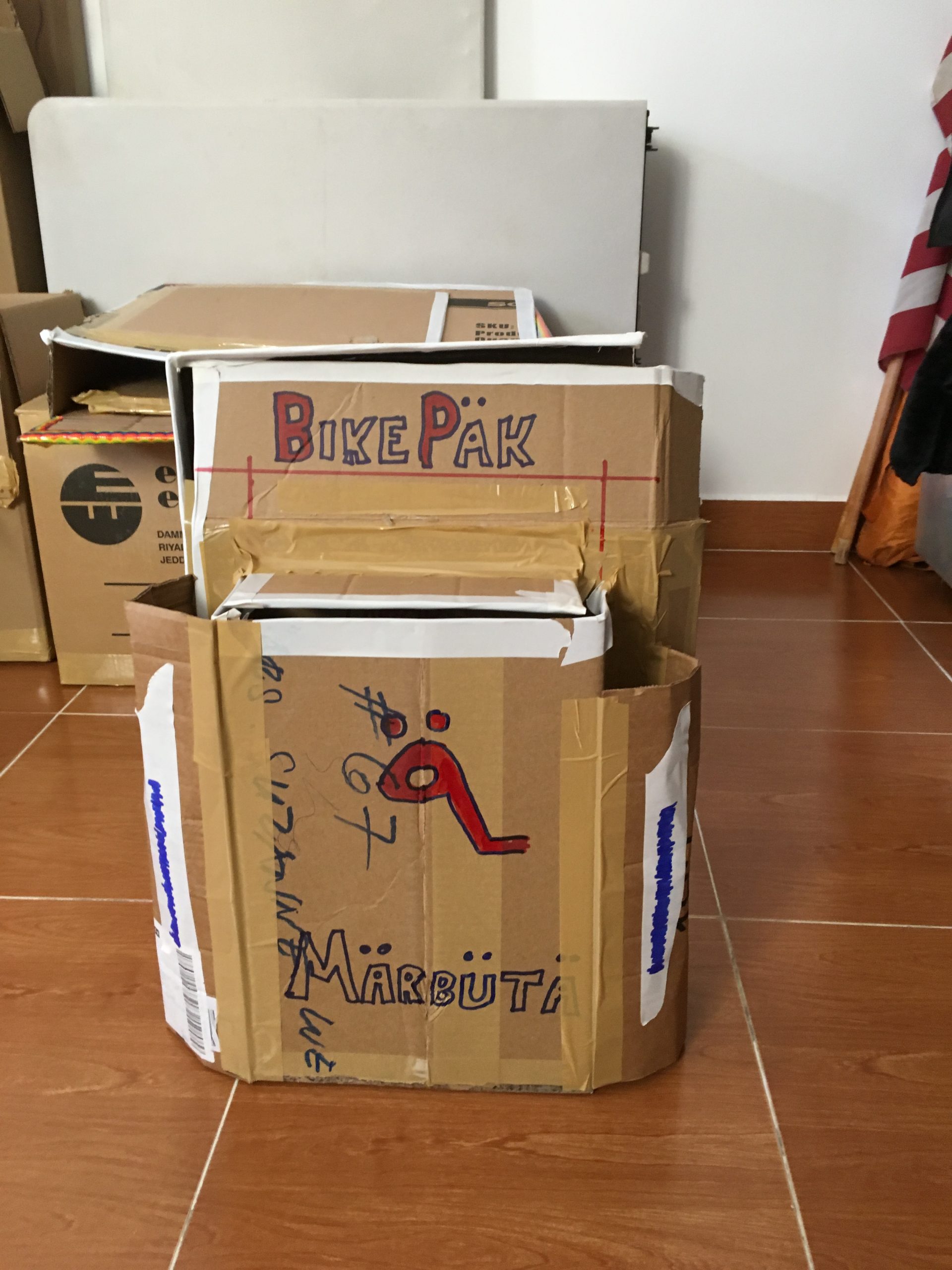 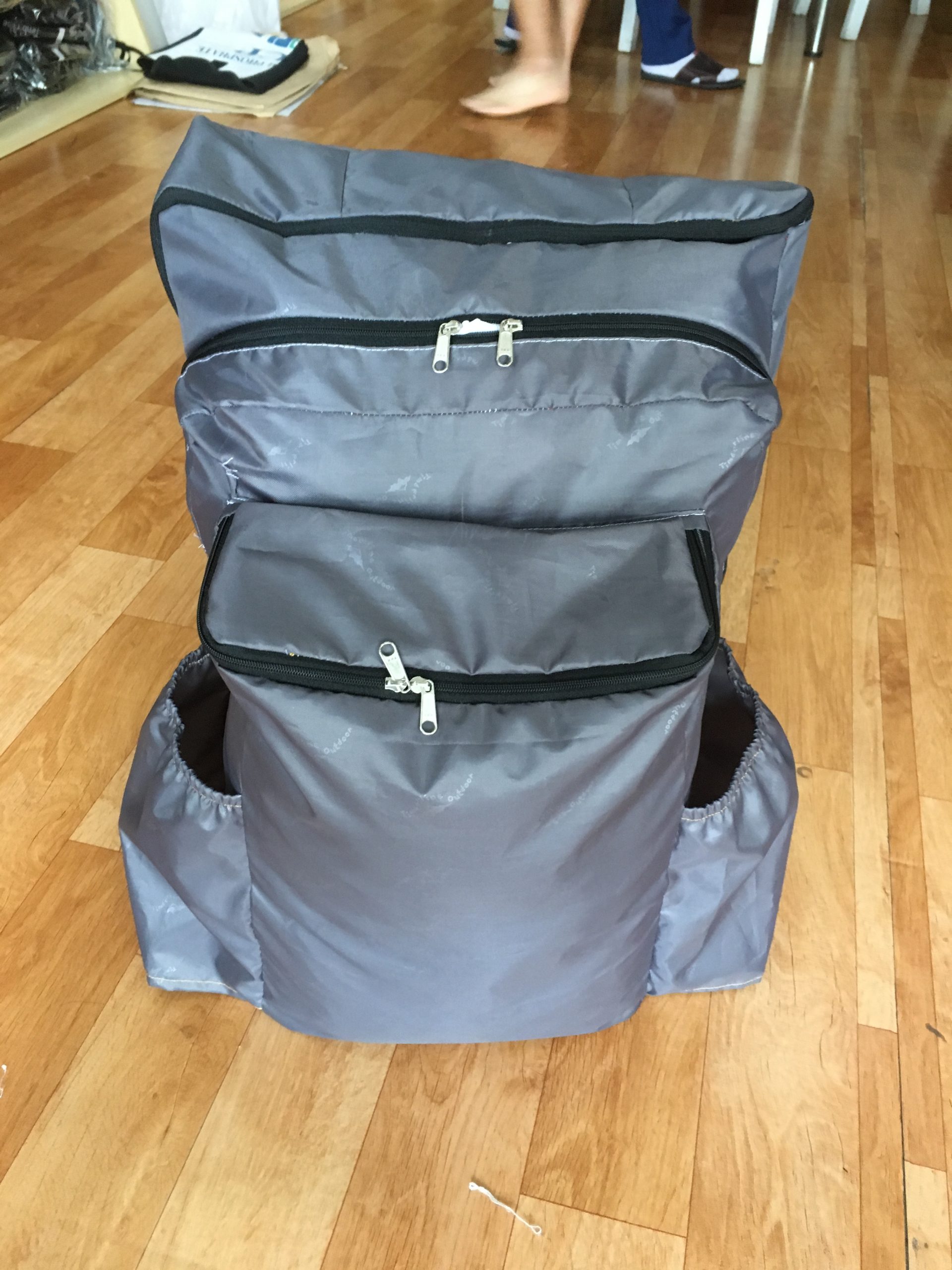 Making the backpack simple was the first challenge.  Aaron knew from personal experience that getting out of bed and both dressing for cycling AND packing for work was a tremendous challenge.  The temptation to put on work clothes and head for one’s car instead of the bike is overwhelming at that time of day.  The act of simply folding your clothes can be enough of an impediment to change riding plans.  So he designed the Shellback to make packing for work easy.  Notably, he designed a garment storage system that takes allows the cyclists to pack a suit—crease free—in 60 seconds.  The tri-fold garment bag allows the rider to safely carry one complete suit, uniform, or casual attire and the Dual-Utility Rotating Hangers allows attire to hang neatly in closet and then rapidly transition to the Garment Sleeve with a quick rotation for fold-free packing.  Then the Garment Bag secures and stores your professional attire in the Shellback or hangs neatly in a closet or locker room. It’s also great for checked luggage! 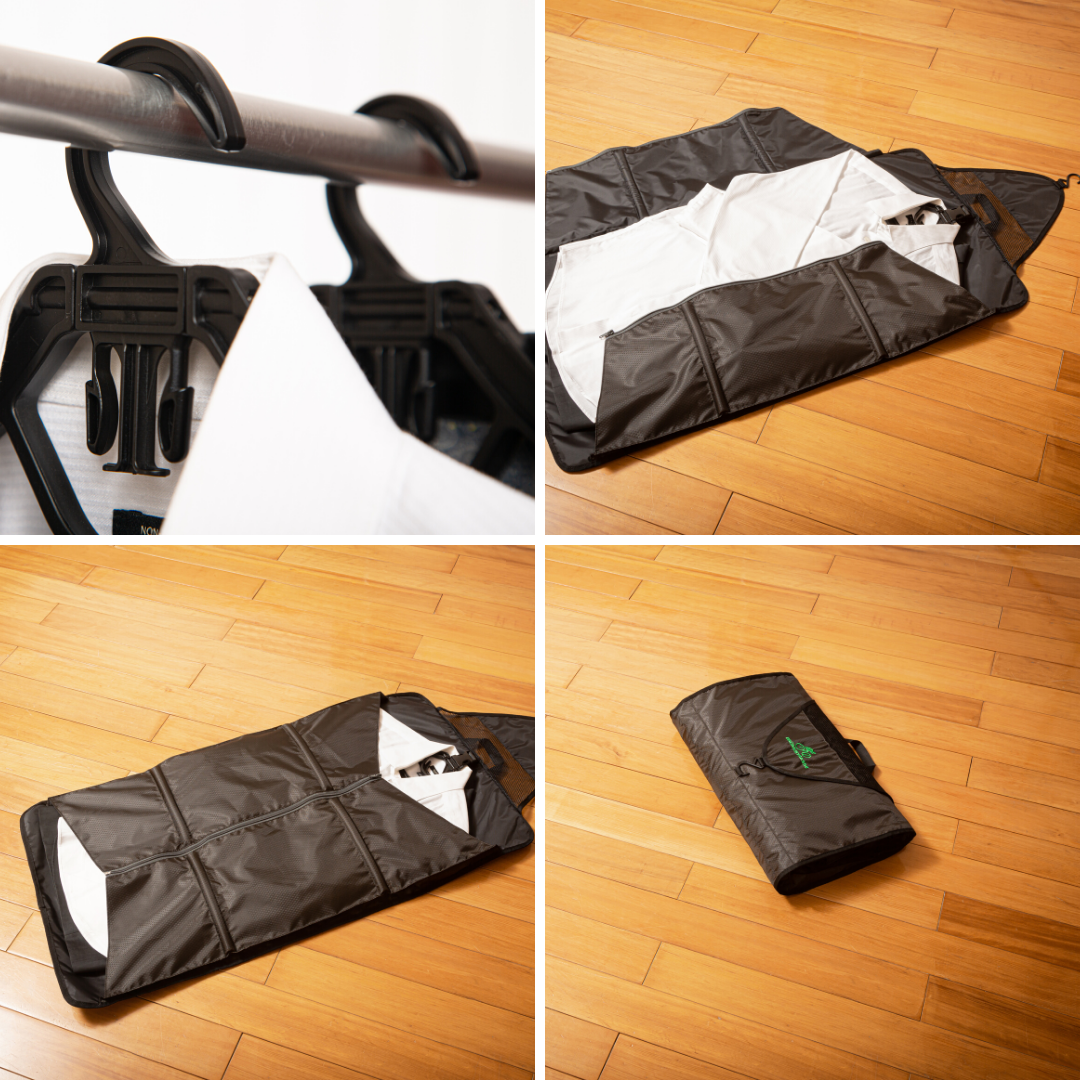 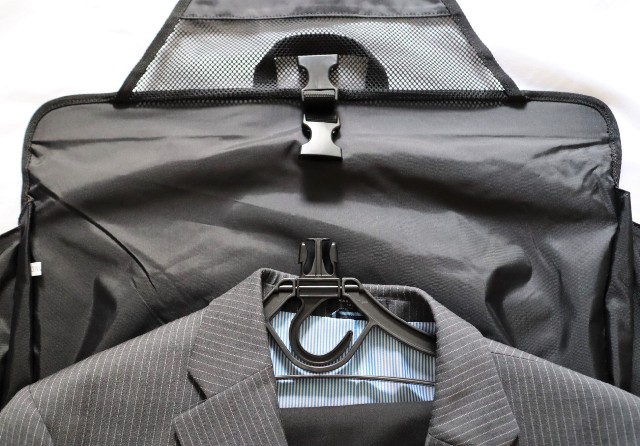 The next consideration when creating the Shellback was organization. A backpack designed for the modern-day cycling office worker needs multiple compartments to quickly store and find the daily items you need to be successful. Whether you pack for a casual or formal office, the Shellback stores either wardrobe crease-free.

Aaron cleverly designed the Shellback for all your one-day work requirements.  The Accessories Compartment organizes and stores toiletries and professional accessories (watch, belt, jewelry, etc.).  Ample exterior compartments hold a wallet, thermos, lunch, power cords, or other daily essentials.  He thoughtfully included a bike-repair compartment which accommodates a spare tube, a multi-tool, and a portable bike pump.  The Computer Compartment secures your laptop in a neoprene wrapper while the Shoe Well is an exterior pocket for footwear that isolates dirt and odors from the rest of the contents and includes pull-out fabric for easy cleaning.  Waist straps feature easy-access storage pockets while the shoulder straps include two external storage connectors that allow you to attach essentials directly on to the straps for one-handed access while riding.  Lastly, a hydration bladder can be added to quench your thirst while you commute to and from. 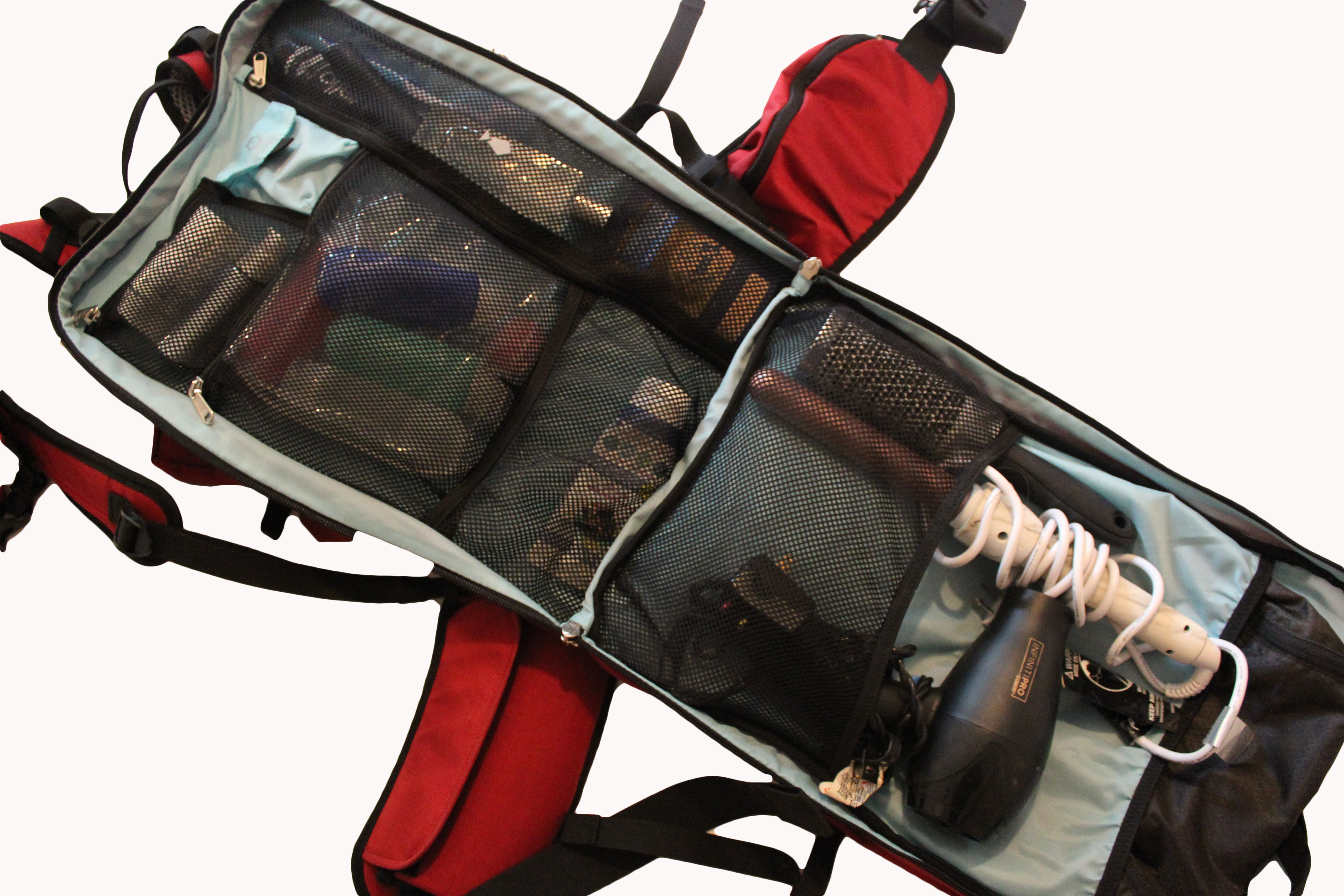 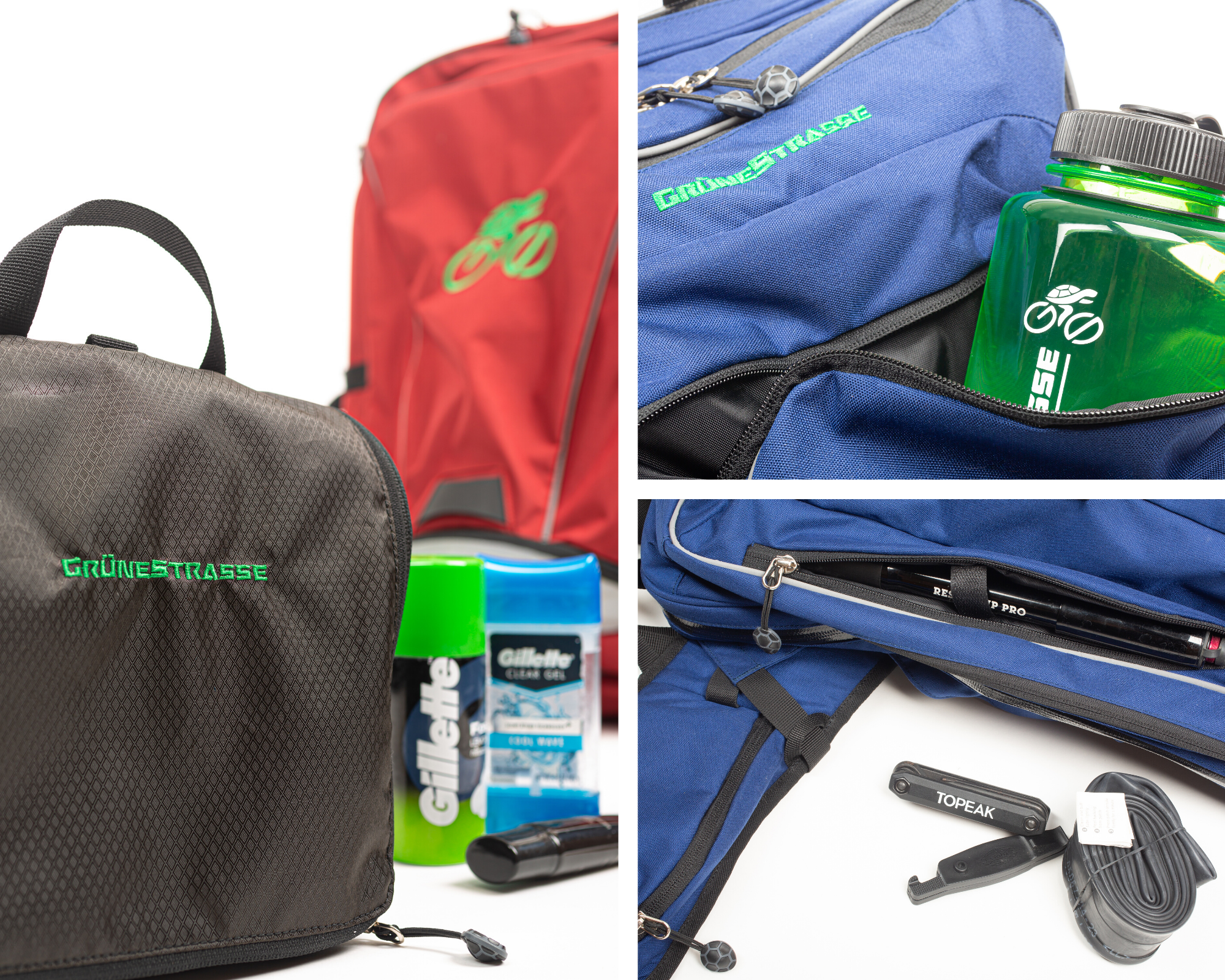 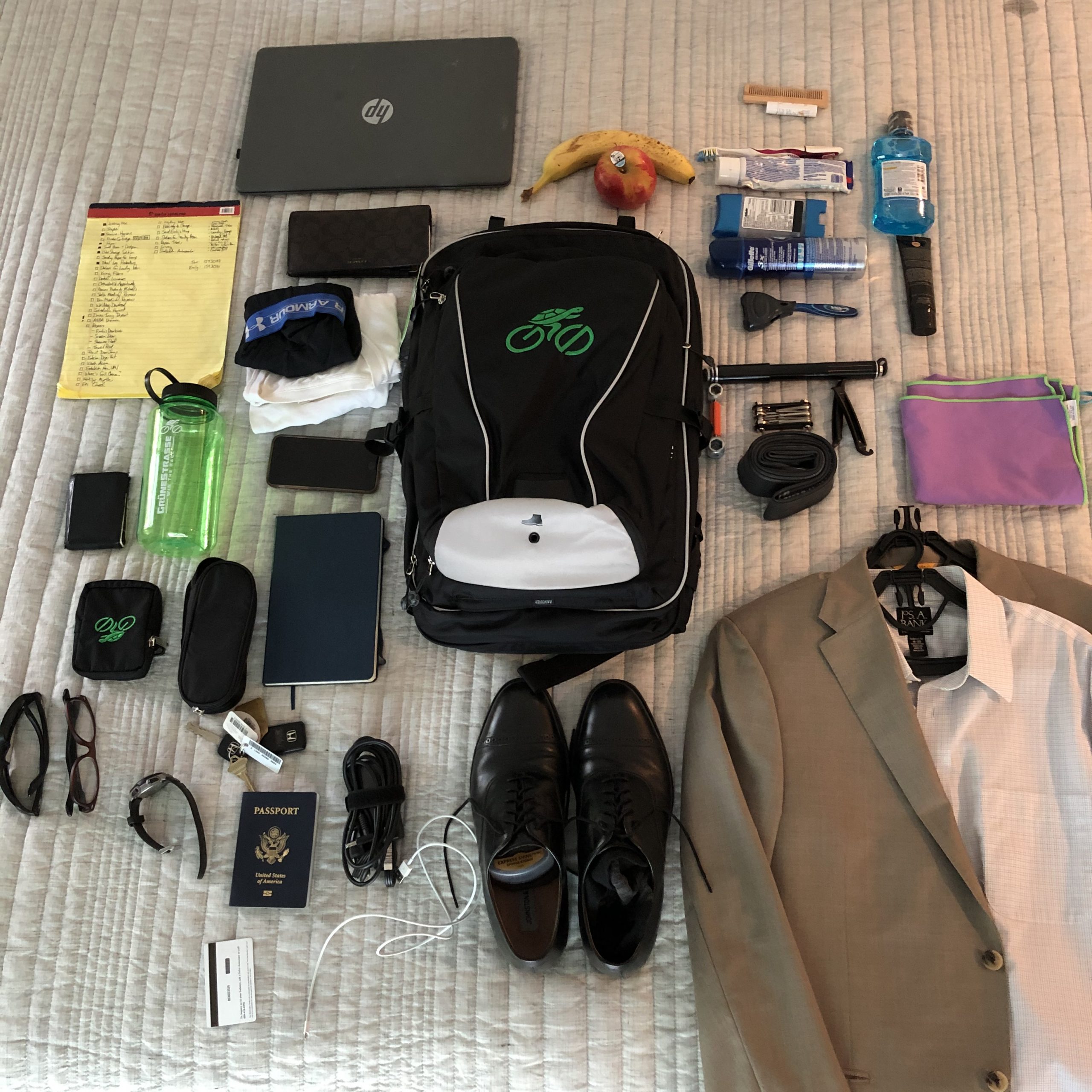 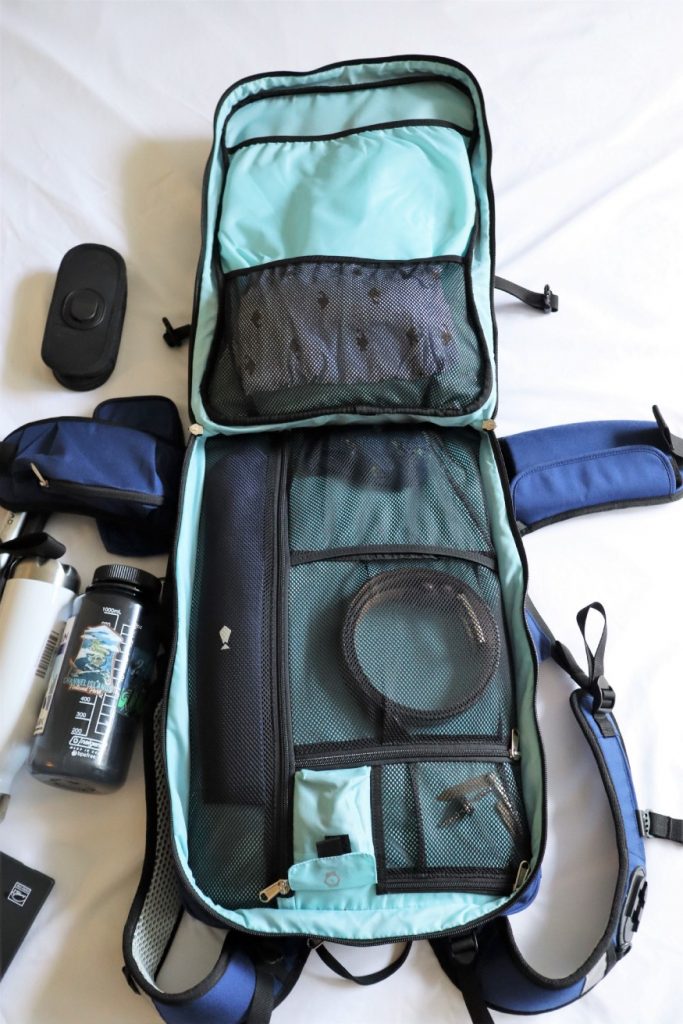 Perhaps one of the most important features of the Shellback is Protection.  The Shellback is designed to protect the contents inside AND the cyclist.  Aaron designed a number of safety features to improve safety for bike to work commuters, particularly while riding in low-light conditions. To make the Shellback users more visible, we added sleek, high-visibility glass-bead reflective material within the exterior design to draw attention of motorists to a Shellbacker on the road.  The unique glass-bead fabric is actually more reflective than OSHA requirements (at 430 lumens!) for safety vests on road crews!  Also on the back is a Hypalon LED loop to hang your bike light. 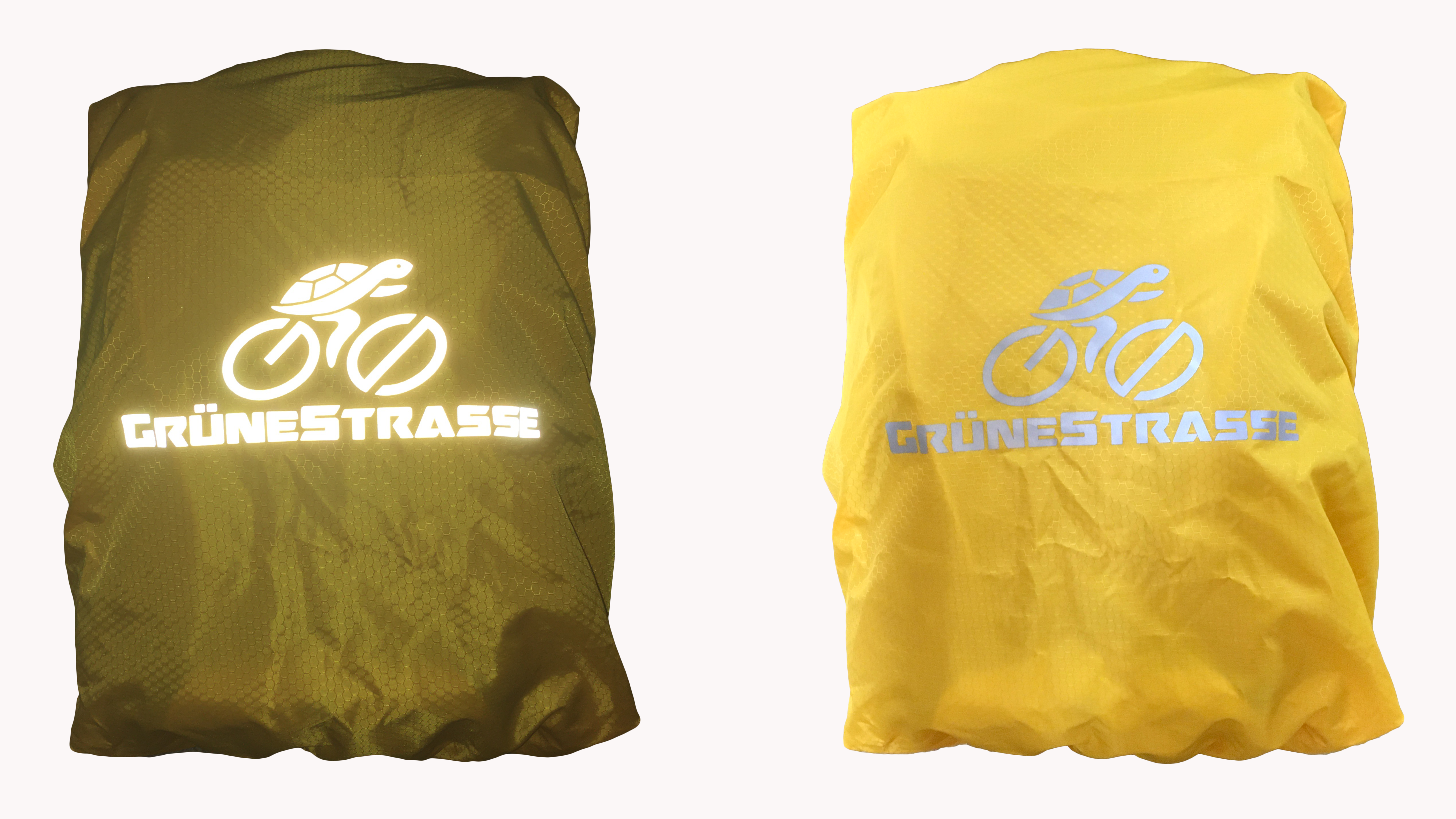 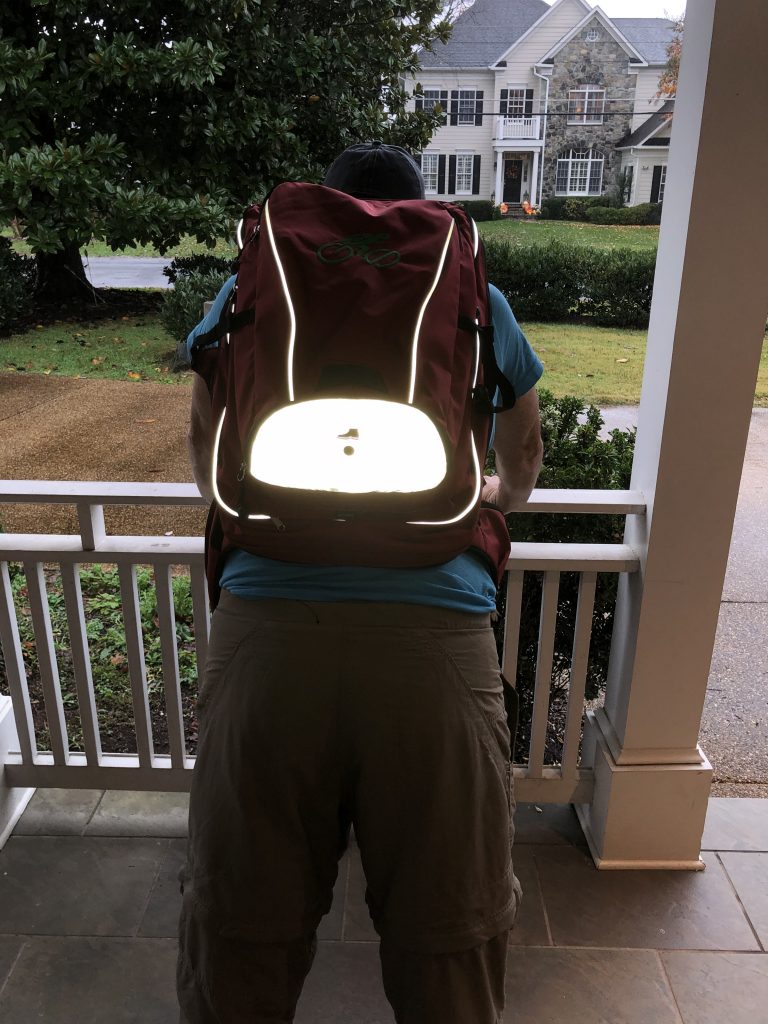 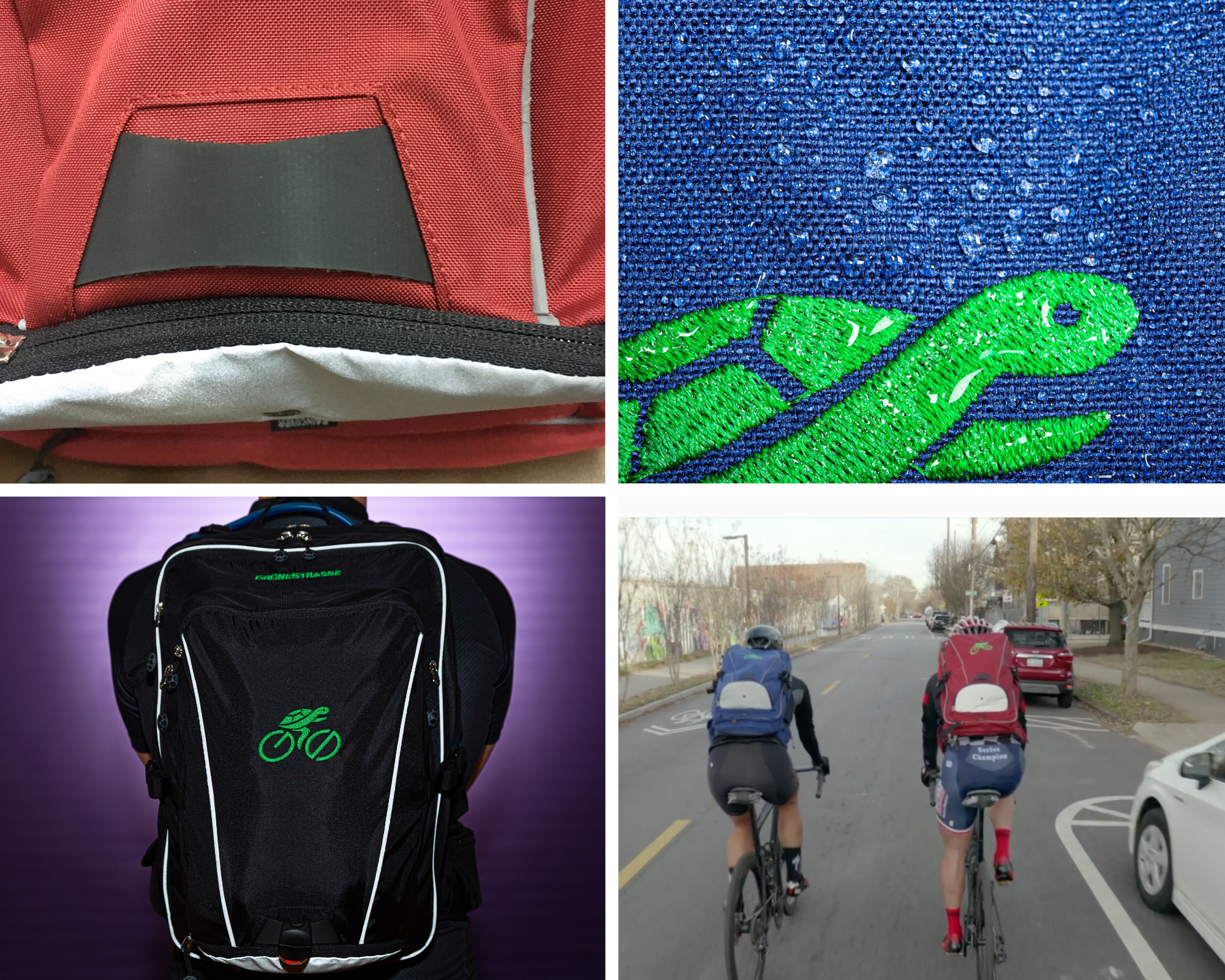 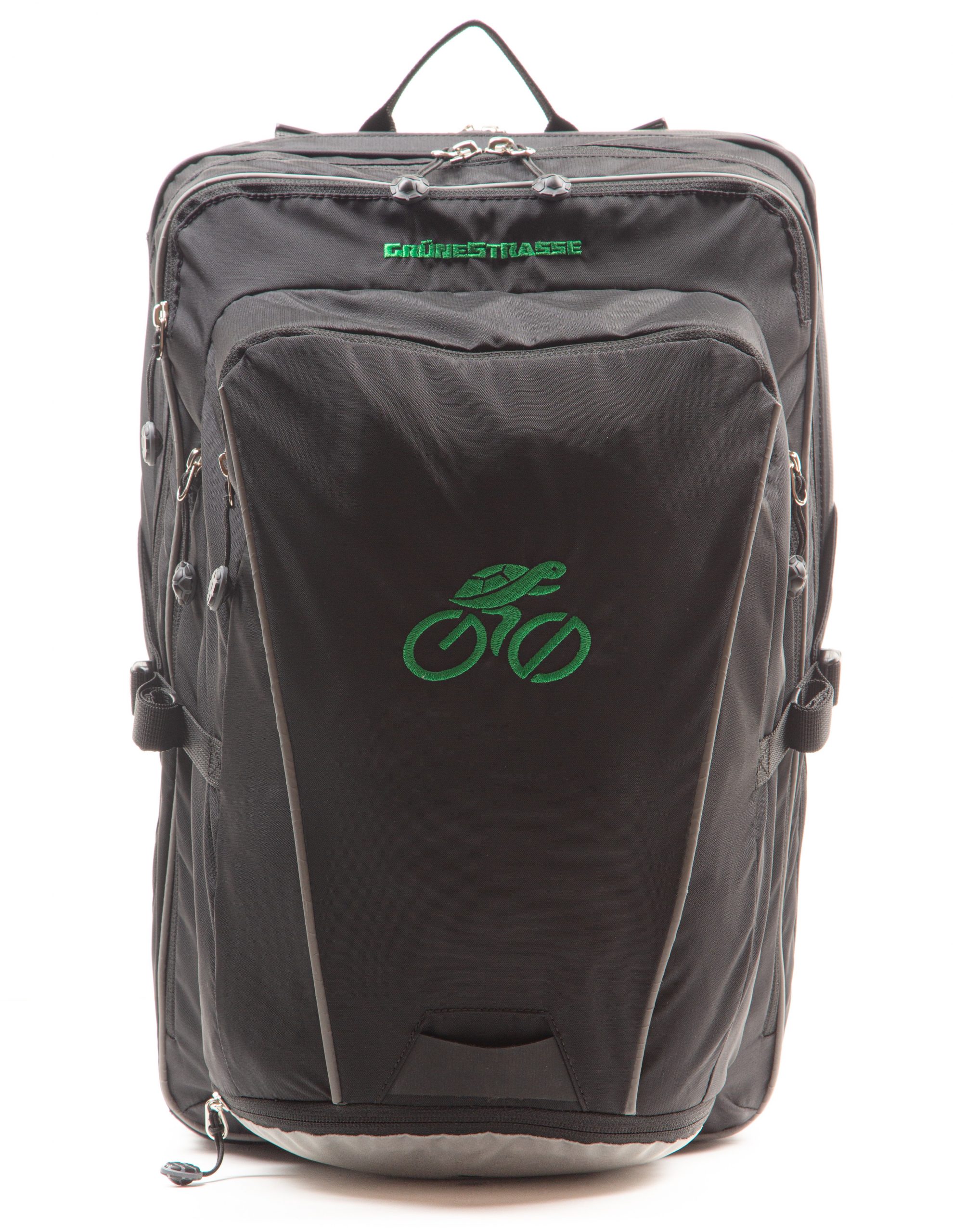 Want to Bike to Work But No Place for Your Professional Attire?

Is your Bike to Work day confined to Casual Fridays?  Do you have two wardrobes—the Bike to Work wardrobe at the office and the rest at home?

GrüneStrasse Shellback: The World’s Most Comfortable Bike to Work backpack

The Shellback is a backpack for cyclists designed by cyclists.  In addition to the Bike to Work SOP, the Shellback is incredibly comfortable.  One Shellbacker described riding with a heavy load as “being wrapped in a hug.”  One of our main features is the Timberline Air Max Ventilation System™.  Air Max is moisture-wicking mesh suspended on an external frame that prevents perspiration from collecting on the rider’s back.

Check out our Win the Race™ Store to see all the features and advantages of the Shellback! We are quickly becoming well known throughout the cycle to work community, and we encourage anyone considering purchasing to read our reviews! 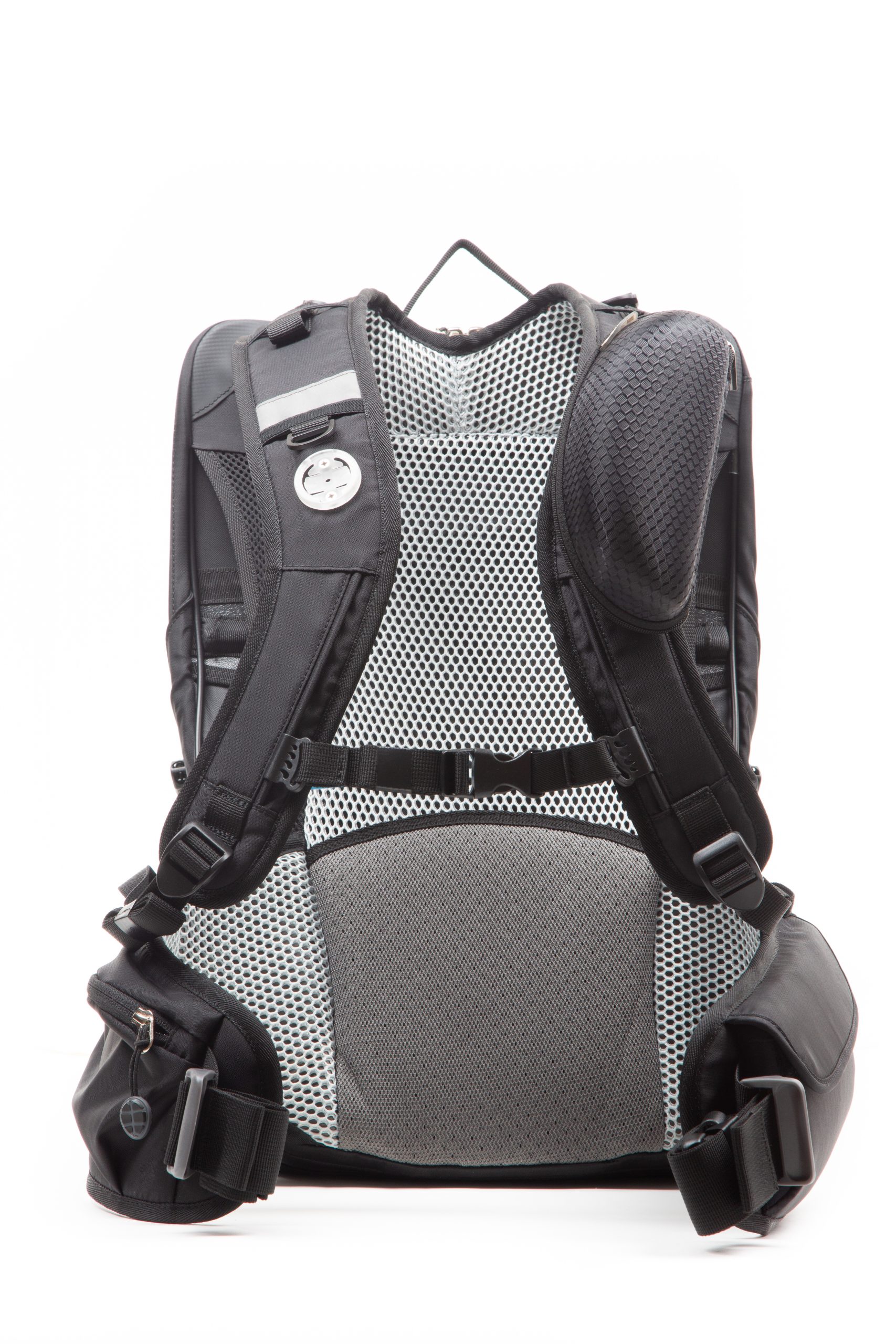 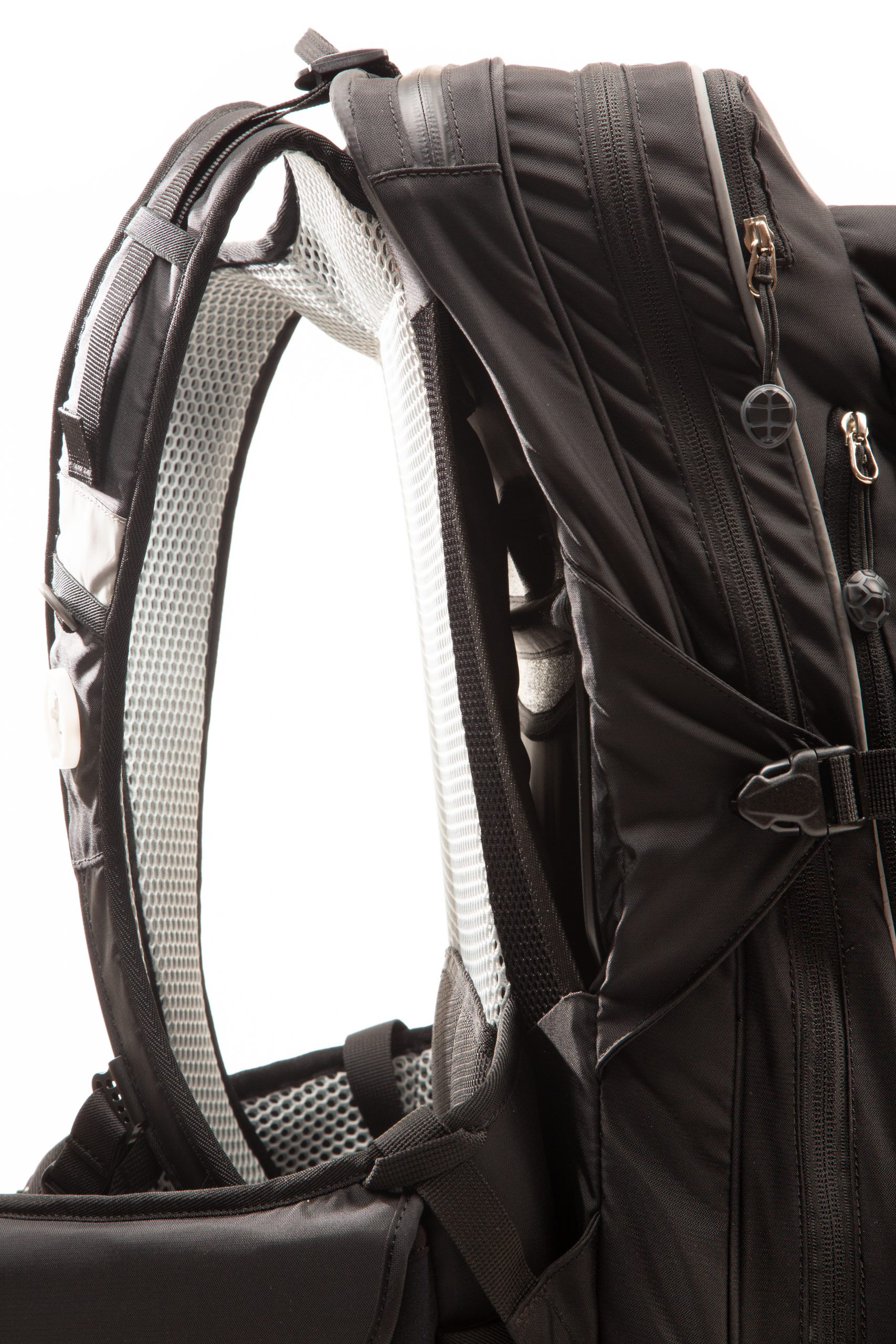 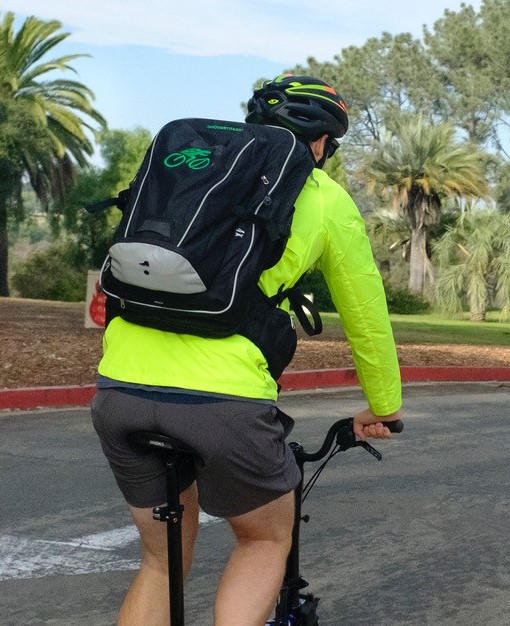 The Shellback succeeds where other every day carry bags fail.  Aaron designed this backpack specifically for the bicycle and micromobility commute, avoiding the pitfalls of other backpacks.  If you are already a fearless bike to work commuter or aspire to be one, choose the lifestyle product that supports the bicycle lifestyle. 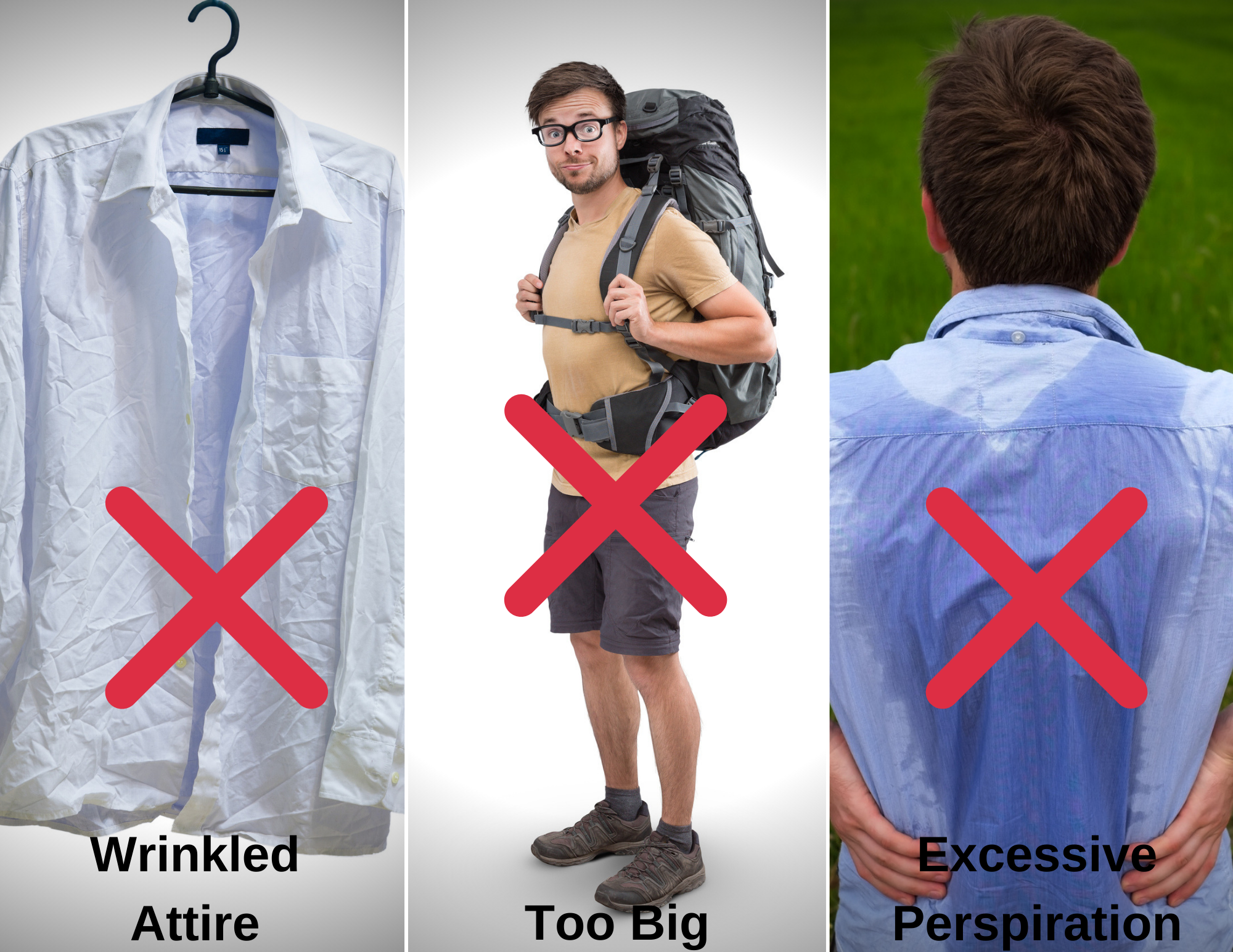